The Story Behind The One Piece Poster

If you’re a fan of the One Piece anime, you’ve probably seen the iconic poster featuring the characters of Straw Hat Luffy, Roronoa Zoro, Nami, Usopp, and Sanji. But have you ever wondered what that poster means? The story behind the One Piece poster is actually quite interesting. It was created by Eiichiro Oda, the creator of the manga and anime One Piece. Each poster has its own meaning in a certain moment. That’s why the stories behind the poster will probably be interesting things that you have never known. Either way, it’s definitely one of the most recognizable posters in all of anime. 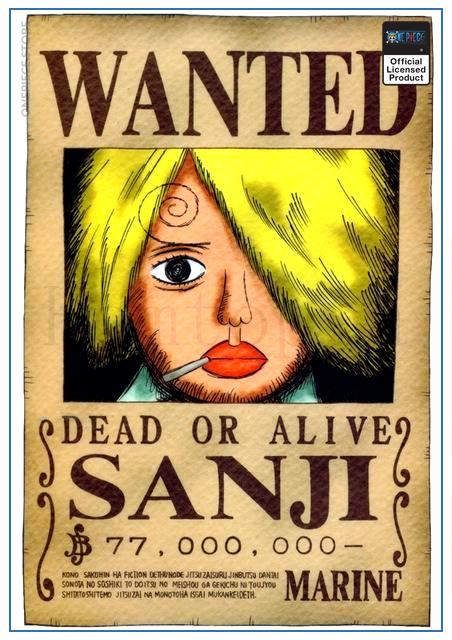 In the One Piece, Sanji is first seen on a wanted poster with a bounty of 77,000,000 berries. He is the chef of the Straw Hat Pirates. Originally, when the new Straw Hat Pirates began their journey to find the legendary One Piece treasure. Each member who joins the Straw Hat Pirates carries a certain amount of bounty berries from the Marines. With Sanji is 77 million berries. Initially, the Straw Hat Pirates had their free photos stolen once, and they didn’t expect it to be an anonymous Navy reporter to take their photo as a wanted poster. However, at that time intelligence man did not take a picture of Sanji and redrawn it according to their imagination. Unfortunately, the painting did not match Sanji’s real face, which made Sanji be desperate for a long time afterward. However, that portrait resembles another character named Duval – the leader of Rosy Life Riders. That’s why Duval was wanted by the Navy for a long time because his face was too similar to the wanted poster. The more Sanji’s bounty increases, the more the Marines want Duval, making Duval hostile to Sanji. Later, when having the opportunity to meet in Sabaody Archipelago and change his appearance after the confrontation with Sanji, Duval became a fan of Sanji in particular and a fan of the Straw Hat Pirates in general and helped them fight with the enemies in the Mermaid Island.

If you are a fan of One Piece and want to collect meaningful posters, this is definitely the perfect product for you. This poster can both show your love for the character Sanji, and at the same time show your support for the character Duval with his passion for the Straw Hat Pirates: https://onepiece.store/shop/one-piece-anime-wanted-poster-sanji-first-bounty-official-merch/ 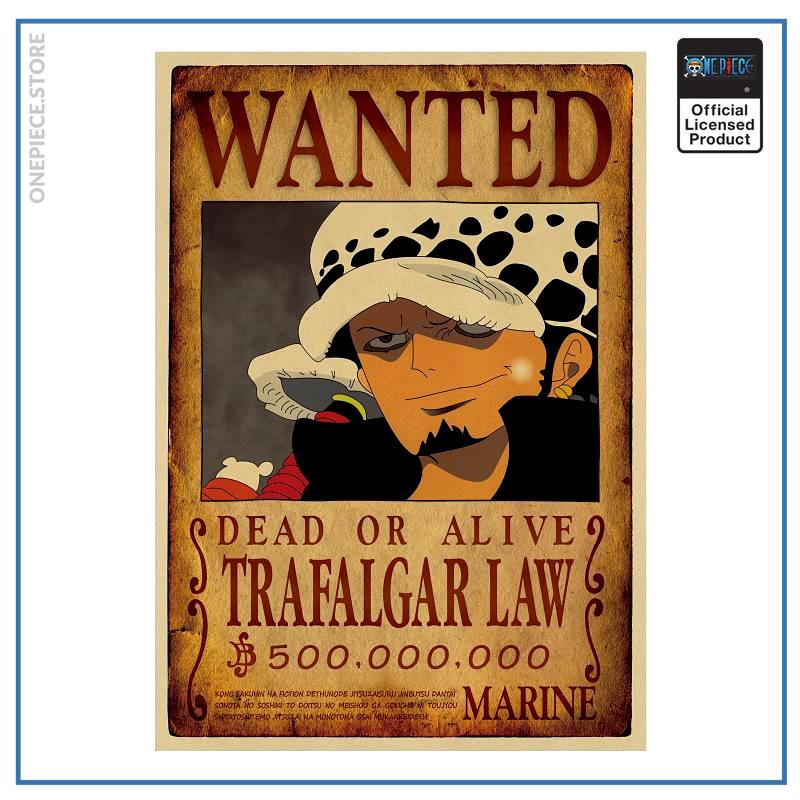 In the world of One Piece, there are many powerful pirates, and among them is the captain of the Heart Pirates, Trafalgar D. Water Law. He is a doctor who uses his medical skills in battle and he is also the user of the Ope Ope no Mi fruit, which allows him to create a “Room” that he can control objects and people. Law is one of the Eleven Supernovas, a powerful group of pirates, each with a bounty of more than 100 million berries. With the power of the devil, Law was able to live to the present. By because as a child, Law’s hometown spread the disease of amber poisoning. As the disease wiped out Law’s hometown, the government sent the army to Flevance to destroy all the people there to prevent the disease from spreading to the neighboring lands. Because of his Ope Ope no Mi ability, Law was able to save his own life and also become a talented doctor to be able to save others. In addition to the power of the Ope Ope no Mi Devil Fruit, Law has repeatedly helped the Straw Hat Pirates fight dangerous enemies and Law has also repeatedly rescued the members of the Straw Hat Pirates from the incident was pursued by the enemy. Although he is a man of few words, Law’s actions always show that he cares about his teammates as well as his friends. And now you can have your very own Wanted Poster featuring Trafalgar Law! This Wanted Poster is an officially licensed product from One Piece and it is made of high quality paper. If you are a fan of Trafalgar Law or One Piece, then this Wanted Poster is a must-have in your collection!: https://onepiece.store/shop/one-piece-anime-wanted-poster-trafalgar-law-bounty-official-merch/ 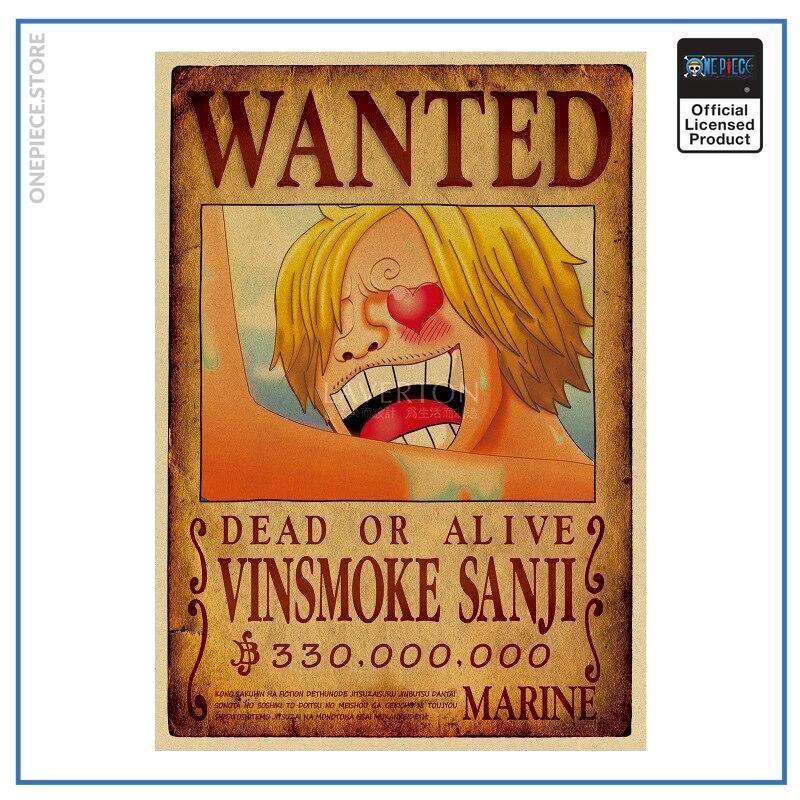 Sanji was first introduced in episode 39 of the anime series, and he’s been a fan favorite ever since. He is a pirate and the chef of the Straw Hat Pirates. Sanji is an important member of the Straw Hat Pirates, and he has helped them out of many difficult situations. He is also one of the Eleven Supernovas. Sanji is known for his chivalry as well as his impeccable cooking skills. He is also known to be a smoker, which often gets him in trouble. Sanji is a strong fighter and he has taken down some of the strongest opponents in the series. He is a loyal friend, and he always puts others before himself. Sanji is truly a selfless person, and that’s one of the many reasons why he is so loved by fans around the world. As a member of the Straw Hat Pirates who did not possess Devil Fruit powers, however, Sanji is one of the three most powerful members of the crew along with Zoro and Luffy. Sanji is the third son of Vinsmoke Family from the North Sea. As the son of the most powerful assassin family in the underworld – Vinsmoke, Sanji from a young age inherited the kicks that are said to be the strongest. Besides, the harsh training that the Vinsmoke family gives to their children as well as makes Sanji tempered his physical ability significantly. That’s why, later when he was featured on the marine’s wanted note, Sanji was also nicknamed “Blackfoot” with his kicks like heaven knocking down his opponent. The picture on this wanted poster shows Sanji showing his love for pretty girls he meets. This is also a distinctive feature of Sanji’s identity, when he never hits a woman, even if it’s a strong or weak enemy, he never fights back. It is also because of this personality that Sanji has repeatedly fallen into danger with female enemies. If you are a fan of One Piece as well as a fan of “Blackfoot” Sanji, you should not miss this impressive poster of ours for your collection: https://onepiece.store/shop/one-piece-anime-wanted-poster-sanji-bounty-official-merch/ 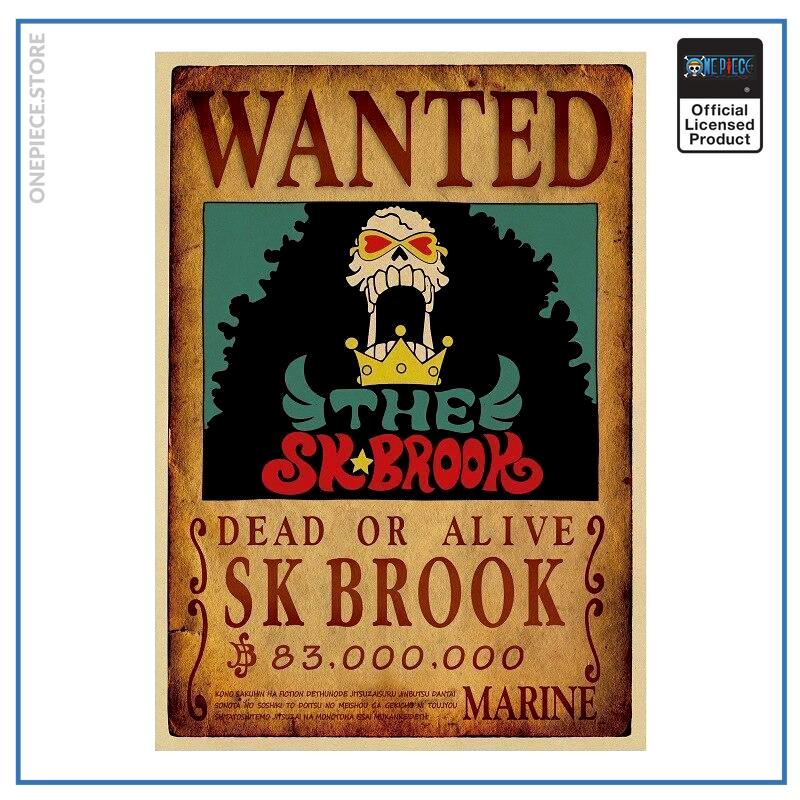 Brook is a musician for the Straw Hat Pirates. He is a skeleton the crew found on a ghost ship in the Thriller Bark Section. Brook is truly loyal to his crew and is always ready to fight for them. He is also very protective of his music and instruments. Brook is a very talented musician and often uses his music to appease teammates or cheer them up. He is also a very good swordsman and often uses his sword skills in combination with his voice to create a fighting prowess to protect his friends. He is a skeleton resurrected by the power of a Devil Fruit. His Devil Fruit powers are known as Yomi Yomi no Mi, which allows him to come back to life after death. He is an excellent swordsman and has a great sense of humour. He’s also a bit perverted, which can be seen from the way he looks at women’s breasts along with the sayings “Can I see your panties?” every time he meet any beautiful woman. But despite everything, he is a good guy and always ready to help his friends. Brook is one of those characters that you can’t help but like. On this poster is a wanted photo of Brook after the Timeskip. During the 2 years of Timeskip, Brook lived up to his passion for music and became a famous musician around the world. And the picture on the poster is a representation of his concert. Nicknamed “Soul King”, Brook has the ability to bring music to the deepest places in your soul just like the nickname people give him.

Due to possessing the power of the Yomi Yomi no Mi Devil Fruit, Brook has the ability to revive as well as longevity. That’s why he had to witness the departure of his old comrades and lived alone on the ghost ship for a long time afterwards. It is also because of the power of this devil fruit that One Piece fans are concerned that Brook will have to experience loneliness again, when the members of the Straw Hat Pirates will also die old and weak, leaving him alone in this life.

If you are a fan of One Piece and a fan of the voice of “Soul King” Brook, you should not miss this poster design of ours for your own collection: https://onepiece.store/shop/one-piece-anime-wanted-poster-brook-bounty-official-merch/ 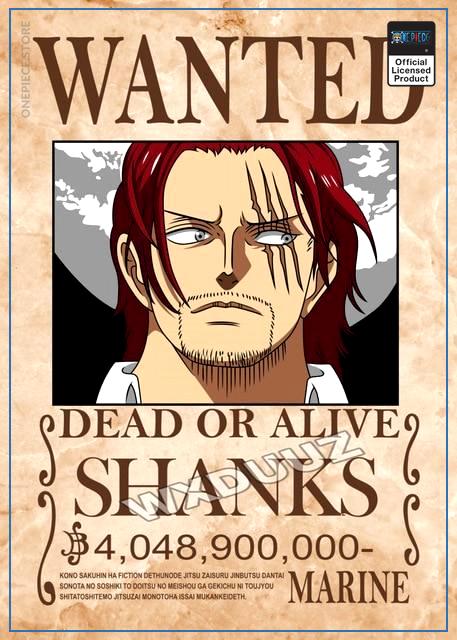 Shanks is the captain of the Red Hair Pirates and one of the Yonko. He is also a former member of the Roger Pirates, where he is known as the “Red-Haired Shanks”. He is a strong warrior with excellent sword skills. He has a bounty of 4,048,900,000 berries. Shanks is a tall man with broad shoulders and a small waist. He has red hair, which he wears in a messy mohawk. He also has a large scar over his left eye, the one he received during his battle with Mihawk. He usually wears a red vest over a white shirt, and he also wears a black cape. He carries his sword on his right hip. Although he has only been on the Yonko for 6 years, Shanks has made the whole world wary, not only because of the high bounty equivalent to Shanks’s ability, but also because of Shanks’ peaceful personality. Shanks is said to be a fairly peaceful person who does not like war, so he is not considered a threat by the Marine. Therefore, although the power of Shanks has not been clearly depicted by Oda, everyone knows that Shanks’ strength must come with a higher bounty than that. In the recent movie film Red, Oda showed us the power of a Yonko. While Shanks was protecting his only daughter, Uta, from being hunted by the Marines. Shanks only used a little of his Conqueror Haki, but the Marines, Vice Admirals and Marine Admirals with the power that are said to be the most advanced like Kirazu or Fujitora could not stand up when clashing with the Shanks’ Haki power. Besides, we can also see the ability of the Red Hair Pirates is still a mystery when all members of the crew can withstand the Conqueror Haki that Shanks uses, we can see the members of the Red Hair Pirates are also members of uncanny ability.

If you are a fan of One Piece and have just watched the movie film Red recently, you will surely admire the power of Shanks. And what are you waiting for when you can immediately add this high quality poster of ours to your own collection: https://onepiece.store/shop/one-piece-anime-wanted-poster-shanks-bounty-official-merch/